For Home & Garden
Home » European Barberry (Berberis Vulgaris) 10 seeds
All categories
Have you seen them? 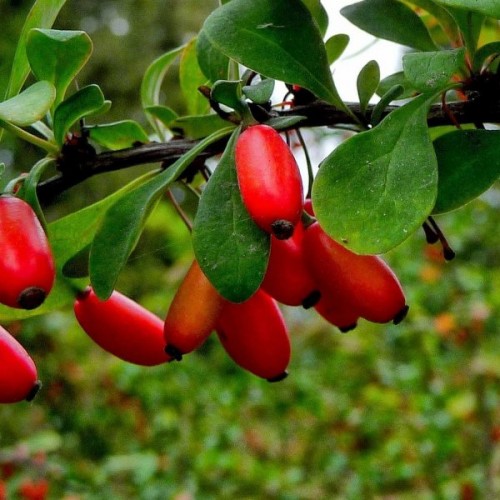 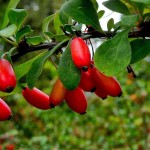 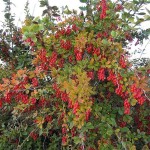 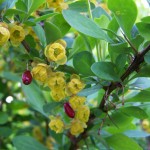 Berberis vulgaris is also known as common barberry, European barberry or simply barberry, is a shrub in the genus Berberis. It produces edible but sharply acidic berries, which people in many countries eat as a tart and refreshing fruit.
The shrub is native to central and southern Europe, northwest Africa and western Asia. it is also naturalised in northern Europe, including the British Isles and Scandinavia, and North America. In the United States and Canada, it has become established in the wild over an area from Nova Scotia to Nebraska, with additional populations in Colorado, Idaho, Washington State, Montana, and British Columbia. Although not naturalised, in rural New Zealand it has been widely cultivated as a hedge on farms. It is cultivated for its fruits in many countries.
It is a deciduous shrub growing up to 4 m high. The leaves are small oval, 2–5 cm long and 1–2 cm broad, with a serrated margin; they are borne in clusters of 2-5 together, subtended by a three-branched spine 3–8 mm long. The flowers are yellow, 4–6 mm across, produced on 3–6 cm long panicles in late spring. The fruit is an oblong red berry 7–10 mm long and 3–5 mm broad, ripening in late summer or autumn; they are edible but very sour, and rich in Vitamin C.
In Europe, the berries have been traditionally used as an ingredient in making jam. The berries are high in pectin which makes the jam congeal as it cools after having been boiled. In southwestern Asia, especially Iran, the berries are used for cooking, as well as for jam-making. In Iran, barberries are commonly used as a currant in rice pilaf.
Prefers a warm moist loamy soil but it is by no means fastidious, succeeding in thin, dry and shallow soils. Prefers a lime-free soil according to one report. Grows well in heavy clay soils. Succeeds in full sun or light shade. Plants are hardy to about -25°c. A commonly grown ornamental plant, there are many named varieties. Plants can be pruned back quite severely, they resprout well from the base. Unlike most other members of this genus, this plant does not usually hybridize with other species. An alternate host of 'black-stem rust' of wheat so it has been extensively grubbed up from its habitats. This species is notably resistant to honey fungus.
Information source: wikipedia.org. 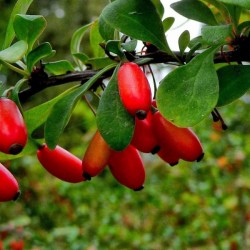